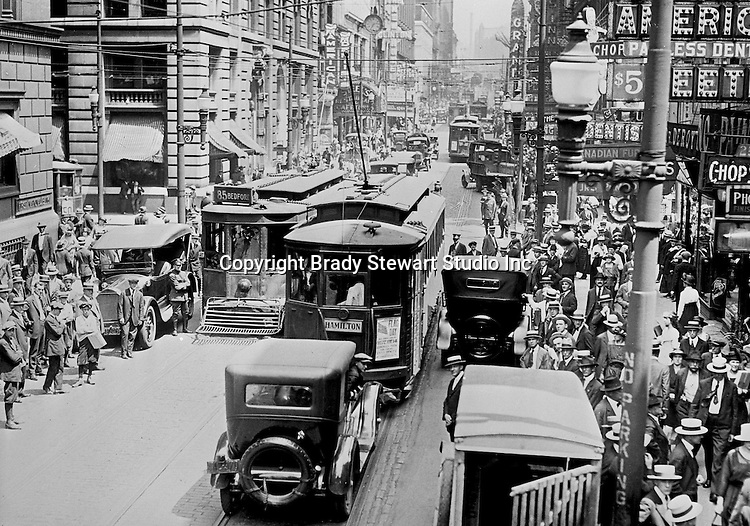 Pittsburgh PA: View of an old lantern slide created by Brady Stewart for the Pittsburgh Citizens Committee on City Plan (CCCP) when they were crafting the City Plan.
This view is of 5th Avenue at lunchtime to highlight the need for a more efficient traffic pattern.
The Citizen's Committee was organized to produce the Pittsburgh Plan for infrastructure including playgrounds, major streets, Parks, Public Transit, Railroads, and Waterways. Some of the cities most accomplished and influential citizens volunteered to serve on the various committees from 1920 thru 1924. Prominent citizens included: Richard and Andrew Mellon, Charles Armstrong, Henry Buhl Jr., Edgar, Issac & Oliver Kaufmann, Roy A. Hunt, George Davison, and many many leading Pittsburgh companies. They all paid an annual subscription (dues) to fund the activities of the Citizen's Committee. Brady Stewart provided photographic services for the committee.
The negative and print were ordered by the Pittsburgh Regional Planning Association for a meeting in 1968.
Brady Stewart Studio Inc